“The Most of Challenging Part of Trying to Recover from the Flood? “All of It”: Sean Murphy’s Story

Home/Flood/“The Most of Challenging Part of Trying to Recover from the Flood? “All of It”: Sean Murphy’s Story
Previous Next

“The Most of Challenging Part of Trying to Recover from the Flood? “All of It”: Sean Murphy’s Story

The cameras he installed at his Sanford home were connected to his phone. They now showed an unbelievable picture. In real-time, Sean watched his house get destroyed by the floodwaters due to the dam failure.

“It was surreal because everything was floating around,” Sean said. He had safely evacuated to Mt. Pleasant. “I never thought the water would get that high.”

The house was not just a home for Sean. For generations, it was a backdrop for his family’s memories.

“My home has been in our family since the early 60’s,” Sean said. “My mother and her siblings grew up spending their summers on the lake as did my sister and I, and now we have a fourth-generation that has started summer life on the lake (when it comes back).  We have a close-knit neighborhood with neighbors that have all been here since the mid 50’s and early 60’s.  We are like family and frequently visit around bonfires, boat rides, and the occasional pop-up fish fries.”

Because of the dam failure, the neighborhood now had another thread to weave their bond even tighter. The floodwaters brought each family their own damages and loss.

“The landscape of our neighborhood has changed dramatically since the flood,” Sean explained. “Not only the lack of water but seven homes on our street are now gone.  It was painful to see good neighbors leave homes that they spent their lives in and raised their children in. I miss waving at my neighbor, Donna, as she is not able to rebuild on that site.

Sean said he had three feet of water in his water and garage. Because of the age of the house, everything needed to be gutted to the studs and brought up to code. All furniture and most personal items needed to be thrown out because of mud and lake water contamination.

Thankfully, he secured safe, temporary housing from United Way of Midland County, who paid for him to stay in a hotel.

“Then I spent most of the summer living in my camper in the driveway until it got too cold,” Sean said. “Friends are letting me stay with them until I can get back into my place.”

As Sean began to pick up the pieces of his life, he realized it was not going to be a quick, easy fix.

“The most challenging part about trying to recover from the flood honestly? All of it,” he said. “It was overwhelming and difficult to even know where to start.” 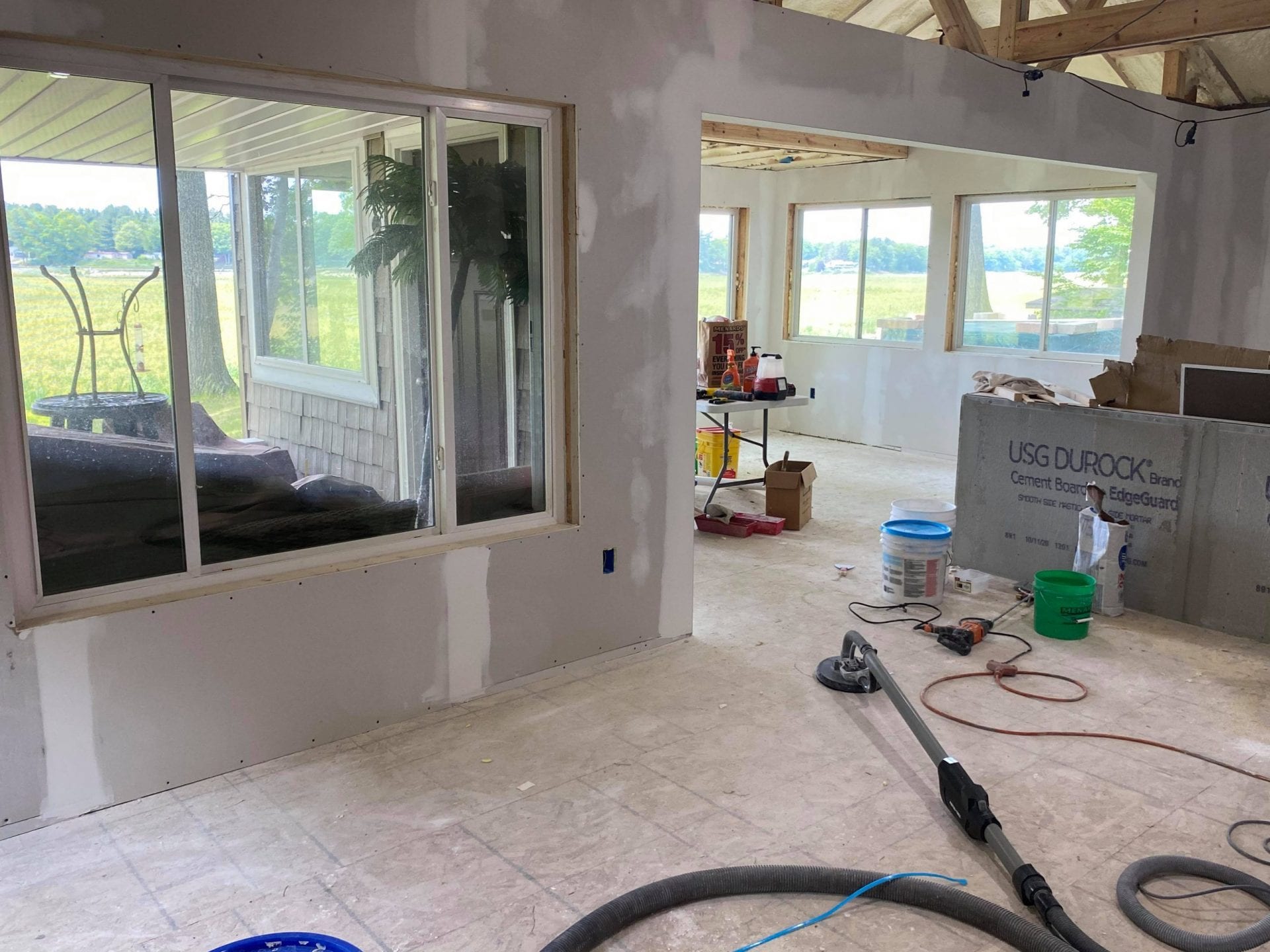 “Neighbors, family, friends, and volunteers like Rick Hatfield’s group, Jeff and Dawn Swebe, volunteers from Church of The Latter-Day Saints, The Islamic Center, Calvary Baptist Church, and other local churches helped with the tear out, sorting, and cleaning, as well as finding and donating materials for the re-build,” he said.

But it was the Whirlpool Appliance sale hosted by United Way of Midland County that became an even bigger catalyst for change for Sean. Sean stopped by the United Way office to pick up a coupon made for flood survivors to use at the appliance sale. That’s when he met Becca Marcott, a disaster case manager with Long Term Disaster Recovery.

“Becca started asking me questions about where I was at in the recovery process,” Sean said. Turns out I was a long way away from needing appliances.”

Becca was able to get the process going with FEMA and lining up other resources for Sean to be able to rebuild his home.

“She has been tireless and has put in long hours in helping me,” he said. “I would not be as far along without her. I was ready to board the house up and just walk away.  In the fall, I was not confident that I would be able to move back into my home. Now I have drywall up, new wiring and plumbing, and looking forward to moving in sometime this summer.  If anyone is struggling with anything regarding the flood, I would highly encourage them to contact Becca.”

Sean said Becca and the community have made a huge difference in his life.

“Thank you to Becca and all of the people that have worked tirelessly to rebuild our community,” he said. “Also, a huge thank you to those in the community that have donated to help myself and others affected. It has helped more than you know.”

If you are a flood survivor looking for more information and support, contact a disaster case manager at call 989-374-8000.

About the Author: Ashley Kring