“It Was Just Ours”: Sharon’s Story

Home/Community Impact, Flood/“It Was Just Ours”: Sharon’s Story
Previous Next

“It Was Just Ours”: Sharon’s Story

After Sharon Cheney and her husband Gaylord sold their Midland home in August of 2019, they were happy to settle into their new house on Sanford Lake.

But Mother Nature had other plans.

“My husband and I bought the home in Sanford in August of 2019, and the flood happened in May of 2020,” she said. “This was our retirement plan. We went in that fall and did a bunch of work. We were content with where we were at…and then the flood hit.”

“Our mobile home was strapped down with hurricane straps, but it still moved 20 feet off the foundation and twisted the frame,” she said. “There was a pontoon leaning against our house. It wasn’t our pontoon…it had washed up on our property. All I can say is it was heart-wrenching. We were in pure shock.”

Mother Nature held her own type of garage sale, using her might to move items from one yard into the next.

“We found the owners of the pontoon,” she said. “There was part of a boat shed that had washed up here. There were other people searching, hoping to find things.”

Items once deemed insignificant suddenly became symbols of their lives before the flood. Sharon carried that emotional weight.

“After things settled down, there was a site online called Lost and Found and I had posted a picture of a couple of wooden chairs missing that used to be out by our fire pit,” Sharon said. “I put them on the site hoping they’d show up. Someone had found one of them four miles down the river. We went down there and sure enough, it was our chair. It still had the cushion on it. When they brought the chair up, I remember crying about it. I felt so stupid, but that chair is part of us. There was no monetary value. It was just ours.”

With their home destroyed, Sharon and Gaylord knew they had to decide: stay on the property and rebuild, or go. Either way, it meant starting over.

They chose to stay.

“Our son and his family live over west of Midland, so we stayed with them for a good month, and then we purchased a fifth wheel trailer that we brought out here on the site,” Sharon said. “We were living in that, and then a group of friends and family got together to help us rebuild.”

A crew came in and demolished the trailer and hauled the remnants of the home that once was their retirement sanctuary, marking the end of one chapter and the start of another.

“It was hard to see the house demolished,” she said. “As long as it was sitting on that lot, we still had it. But when we demolished it, it was really gone. But I think that’s what pushed us forward. We knew it was gone and we had to make up our mind that either we were going to stay, or find something else.”

It was during the rebuilding process that Sharon and her husband tried to get assistance from FEMA, SBA and the VA. The process was not the easiest to navigate, Sharon said. 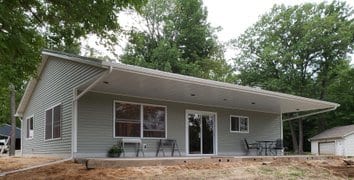 Then United Way of Midland County called. Because of the hurdles and hoops she had already faced, Sharon was a little leery.

“United Way had reached out to us and asked if we would be interested in working with a Disaster Case Manager and of course I said yes, not knowing what was down the road,” she said. “At the time of the flood—I, like many others—were disappointed in the help we were getting. As we cleaned up our neighborhood, we wondered, ‘Where’s our help with this?’ We are cleaning up stuff that floated in from the north and kept thinking, ‘Where’s our help?’”

But as part of the Long-Term Disaster Recovery Group, United Way helped to connect Sharon with Becca Marcott, a Disaster Case Manager. Still, Sharon remained more cautious than optimistic. The process of getting help from the government had been a challenge.

“I remember setting up an appointment with Becca and I told my husband, ‘I don’t know if they will be able to help’.” We were working with FEMA and the VA –my husband’s a veteran—trying to help us with some funding. So when we went to that meeting with Becca, I didn’t have any high hopes of Becca helping. It wasn’t anything against Becca or the organization…we were just used to another ending. We were in turmoil with the paperwork. But with Becca’s understanding and nudging, she didn’t give up on us, which helped us to get through what we needed to do to get assistance.”

Becca became the sounding board and listening ear that Sharon and her husband needed.

“Without Becca and the Long-Term Disaster Recovery Group, we wouldn’t have had the help from FEMA,” she said. “She kept us on the right path and didn’t give up. It felt so nice to have someone in our corner… to have someone that understood what was going on instead of just another name or a phone call. We had someone that we could talk to.”

Sharon said that first call from United Way was a life saver.

“If they hadn’t called us, I don’t think we would have gotten the financial help that we did or the moral support from Becca.”

Nowadays, Sharon and her husband are back on Sanford Lake in their new home that their family and friends helped them rebuild. She said she’s looking forward to the future.

“We love it out here,” she said. “We are feeling good now. We’ve got the new home almost done and we’re even doing research for what the landscape will look like. We have the wildlife, and we enjoy watching them. This has always felt like home. We are comfortable here.”

About the Author: Ashley Kring